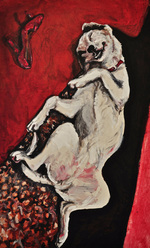 Sleeping dogs lie
Sleeping dogs lie explores the vulnerability expressed by the animals we keep as pets and how this is sometimes only surface deep. The deceptively simple connection between owner and animal is fraught with mixed meanings. While the dog can be symbolic of loyalty and faithfulness, there is the potential paradox for its predatory nature to surface.

The soft-natured, docile dog is often an untruth and the while the owner might say, 'he won't hurt you', common sense dictates a cautionary reaction when confronted by an unknown pet. This unknown and unseen reaction does not mean that all is safe. It is this unseen, lurking potential for harm that fascinates me. (Rigley, 2012) 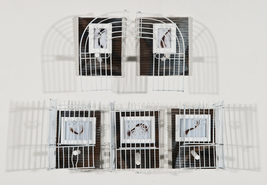 Supressed (memory)
Suppressed (memory) is part of a larger body of assemblage works and was first exhibited in 2010 at the Cairns Regional Gallery as part of a group exhibition entitled Les Femmes and John.  Through repetition and rhythm, the artist examines both positive and negative space, light and shadow.

Using hair kept from her daughter’s haircut to represent purity and innocence, Rigley examines the way traumatic events often remain hidden, and yet tantalizingly close to the surface.

I am interested in how we file our experiences, the events we forget and more importantly, the ones we remember. I am fascinated with the idea that some memories may be suppressed purely for survival purposes, only to resurface much later of their own accord. (Rigley, 2012) 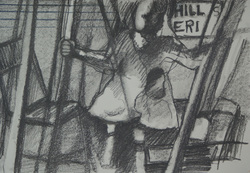