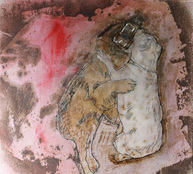 Just playing
Rose Rigley’s second solo exhibition, The Dog Show, was held in December 2012 and investigated the deceptively simple bond between humans and their dogs. Rigley explored the idea that while the dog can be symbolic of loyalty and faithfulness, there is the potential paradox for its predatory nature to surface. Combining personal symbolism and mixed media on traditional and unconventional supports the artist created an experimental series of works.

I am interested in the inextricable link that exists between past experiences and animals from childhood and the present individual. (Rigley, 2012) 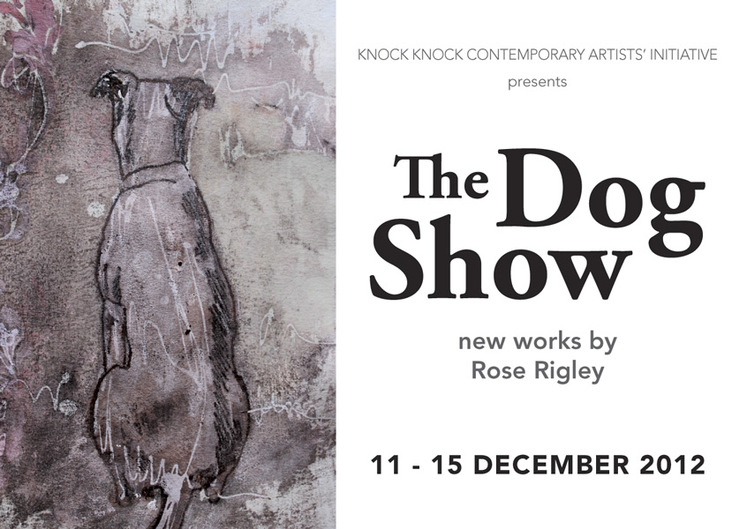 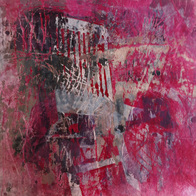 She's already gone I
December sees a new venture in Cairns supporting local artists with a great line up of artists participating in the first exhibition.
Rigley's work explores the surface textures and personal imagery associated with her practice, after losing a beloved family pet. 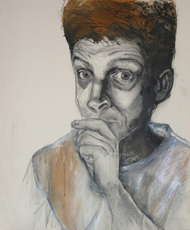 Colyn Huber at La Cruton
THE BLUNT is Cairns' answer to the Archibald Prize. Blunt Edge, now in its 6th year, enables emerging artists to meet and work with more established ones.
Portraiture is an artistic favourite. Long considered a standard ‘rite of passage’ amongst artists and audiences alike, Roland Nancarrow and Dominic Johns sought to adapt the ‘Archibald’ to bring portraiture ‘back to its roots’.

2012 is Rigley's second year of participating in the Blunt. Her subject is Colyn Huber, a local photographer. 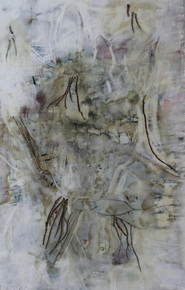 Frozen ground I
White Magic is a group exhibition with white being the common thread in all work.

Frozen ground I explores the figurative landscape of memory at a moment frozen in time. Past experiences form multiple layers that build into the current individual, laying the groundwork for the future. 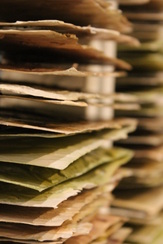 Spinal tap (detail)
Intention to Exit featured works by members of local artist group, Knock Knock Contemporary Artists’ Initiative.  The exhibition, embraced the modus operandi of working ‘beyond the frame’, featuring both sculptural and installation-based works. Societal and environmental frameworks became sites for investigation, as the artists reflected upon structures which shape our social and cultural landscape and define our interactions with our surrounding environment.

Drawing on personal symbolism, Rigley explored hidden memory structures with the intent of putting them on display. Utilizing books as a metaphoric vessels of memories, the artists deconstructed and reassembled these objects; examining the structures for storing these intangible moments at a cellular level, in the conscious and unconscious mind. 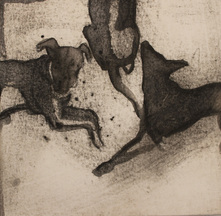 Floyd remade III
After obtaining funding through Regional Arts Development Fund, Innisfail and Cassowary Coast Art Society invited artists to submit works responding to the theme 'Re-invention'. The exhibition gives recognition to the destruction and rebuilding evidenced in the area after cyclones devastated the region in 2009 and 2011.

This work is part of an interactive series that was printed onto magnetic surfaces and mounted on aluminium. The viewer is encouraged to physically piece together the entire 9 works, remaking the interlinking images to form their own version of the overall work.

Utilising the image of the humble family pet, these works give recognition to the power of the individual to change their own circumstances.  (Rigley, 2012) 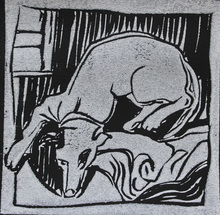 Dog book - black (detail)
Now in it’s second year, SUB-150 was scheduled as part of the Cairns Festival Programme and curated by Rigley as a member of Knock Knock Contemporary Artists' Initiative. The show ran for 2 weeks from August 21 until September 1, 2012 at C1907 Contemporary Artspace, Cairns. The exhibition featured small works for an affordable price, with a view to engaging the wider Cairns community in the contemporary art scene. Twenty-five local artists were featured – both emerging and established, indigenous and non-indigenous. SUB-150 highlighted the wide range of media and concepts being explored by local contemporary artists.

Encapulated in a six page hand printed book, Rigley examines the ordinary moments that make up the sum of our existence; in this case the recalled flashes of activity and inactivity of a family pet.

To listen to an ABC Radio National codcast by Cheryl Northey about The Creative Crawl which included SUB-150 click here. 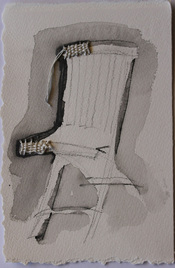 Common thread chair II
In conjunction with SUB-150 2012 and Cairns Festival, Knock Knock Contemporary Artists’ Initiative invited nine artists - both established and emerging - to respond individually to the theme, ’a common thread’. The collection of resulting works formed a concertina collaborative book. This group project’s main goal was to challenge the constraints of the traditional gallery space and take contemporary art to new audiences of all ages.

The book, A Common Thread, was displayed at venues outside the gallery, including at Cairns Central Shopping Centre, Cairns Regional Council Chambers, Freshwater State Primary School and Just Kids Early Education House, as well as on the footpath adjacent to c.1907 Contemporary Artspace. 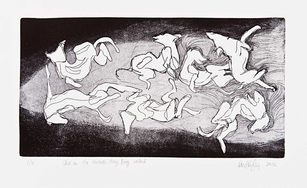 And on the seventh day, Dog rested
Through the media of etching, this work eplores the notion of creation through the eyes of a canine.

The work was exhibited as part of the inaugual Inkmasters Inkfest exhibition, held at the TANKS Arts Centre. 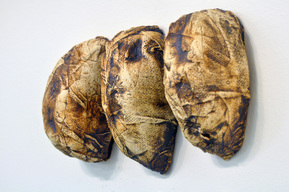 A small commotion about nothing (detail)
A small commotion about nothing is part of Rigley’s first solo exhibition Nest, held at c1907 Contemporary Artspace in Cairns in June 2012. This exhibition reflects on the universal experience of creating a place of safety, security and nurture - the family home - and the fragility and temporal nature of this ‘habitat’. In this work, Rigley considers the proverbial ‘void’ left after the departure of children and the anxiety some people experience in the lead up to this circumstance.

Through this installation, the artist explores patterns of experience, both shared and distinct; and considers the question, ‘Is there an underlying thread that connects all human beings through common circumstances and perceptions?’  Rigley’s works often reflects upon the roles, place and values of the individual within our society, examining our connections as well as our unique qualities.

A child’s original home has such a lasting impact on their future life and yet, in the scheme of things, it may be of quite a transitory nature for both child and parent. I am moved by the idea that the memories we carry from this period help form us into the adults we become. (Rigley, 2012) 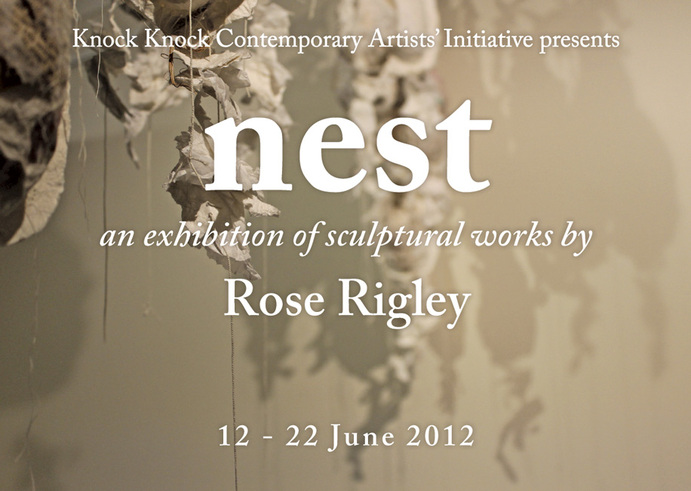 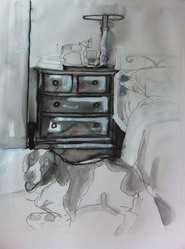 Am I dreaming?
This exhibition invited artists to respond to their favourite place of escape or relaxation; a special 'nook' that could be either physical or metaphysical. The works were aimed at highlighting the importance of drawing in each artist's practice.

From my perspective, drawing is an integral part of the creative process, whether a formative sketch in a visual diary, or as a finished project.  Drawing is the foundation of all that comes after; there is no distinction for me, as I purposely cross over between drawing and painting and drawing and sculpture.

Besides this, there is nothing like a simple line to economically capture the true essence of something or suggestively allow the viewer to make a connection. (Rigley, 2012) 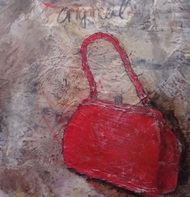 My mother's original bag
This work is from a series featured in this year’s Women in the Arts exhibition in the Cairns region, responding to the theme, ‘the bag: object or obsession?’

Utilizing the bag as a tangible vessel for holding intangible memories, Rigley focuses on the compartmentalizing of a woman’s life experiences, in this case, her aging mother’s. My mother’s original bag is part of a series of works in which each bag represents a plethora of experiences to both the owner and the artist. This very personal work examines the link between these everyday objects and the resurgence of deeply buried memories.

I tend to swing between great admiration and mild irritation in my relationship with my mother but there is also the recognition that the 81 years of her life’s memories are as poignantly fragile as the woman herself. (Rigley 2012)