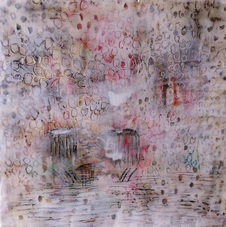 Picnic in a tropical downpour
KickArts Annual Curator's Choice Members Exhibition which responded to living in the tropics in the monsoonal summer months.

This encuastic work is the memory of a previous picnic, seen through the windscreen of a car that the artist and her family sheltered in, as the rain pelted down on the remnants of their picnic.

Paper: Works On and Off  - TANKS Art Centre December 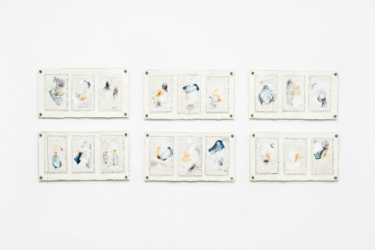 The Blunt Edge of Portraiture - November/December 2013 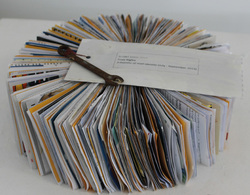 3 months of mail identity (July - September 2013)
THE BLUNT is Cairns' answer to the Archibald Prize. Now in its 7th year, Blunt Edge saw artists explore self portraits in the 'year of the selfie'.
Portraiture is an artistic favourite. Long considered a standard ‘rite of passage’ amongst artists and audiences alike, Roland Nancarrow and Dominic Johns sought to adapt the ‘Archibald’ to bring portraiture ‘back to its roots’.

2013 is Rigley's third year of participating in the Blunt. Her work was awarded the Mixed Media Prize.

The aim of the Prize is to improve and develop the profile of artist’s books and to create opportunities for display and dissemination.  Entrants were encouraged (though not obliged) to donate their books to build a Collection at Bank Street Arts. This is exclusively made up of entries to the Book Prize and is available for public view and shown intermittently in exhibitions and fairs.
As in previous years, this year’s exhibition will feature all books submitted and will be staged as part of the Off The Shelf Festival in Sheffield in October 2013.

You can view the Bank Street Artist Book collection here. 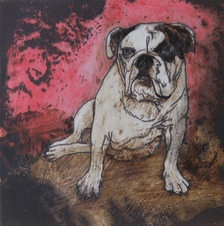 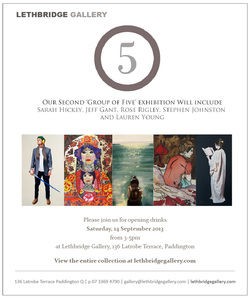 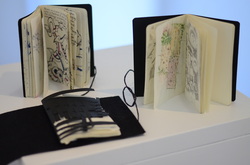 made. Creative Space - Project: art journal 2013 is now in its third year of running.   The journals can be created without any theme or medium restriction over 3 months with each finished creation fitting into its original passport book size. The open theme allows artists to use any medium in any way about whatever they like.
This year the collection of art journals will be featured in various exhibitions in the second half of 2013 including Dogwood Crossing, Miles from 2nd - 30th August 2013. 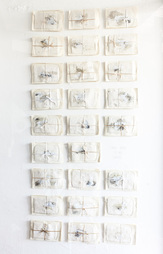 Further details about the exhibition can be found here. 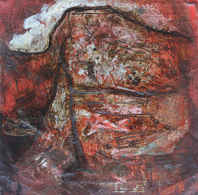 SUB150 is a group exhibition specifically designed for Cairns Festival to highlight the depth and variety of artists practicing in ‘Paradise’.  Now in its third year, SUB150 will be short, sharp and snappy.It will again feature the members of Knock Knock, along with invited local artists, both emerging and established who are creating and living in paradise-like surrounds. The works will be a celebration of this regional beauty, this ‘Paradise’, that is both an inspiration and a haven to so much creative talent.

The idea behind SUB-150 is to reduce or limit the size of the work and by doing so, reduce the price of the artworks, ($150 and under). The intention is to make contemporary art accessible to everyone. 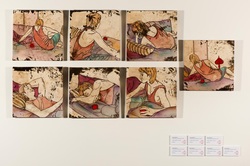 This year, 69 Smith Street Gallery’s annual ‘Likeness’ portrait exhibition challenges the artist to consider the process behind the portrait, in the development of the idea and production of the image.

And a chair as well (solo) 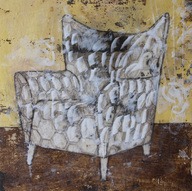 And a chair as well III

And a chair as well takes a whimsical look at interior patterning and favourite comfortable chairs for one.

The mixed media and encaustic works allowed the artist to explore process and repetition. Rigley draws a parallel with everyday life patterns and the time consuming, repetitive tasks involved in creating a home and family. Utilising an iconic array of period chairs to represent the lone individual across the generations, the artist questions the purpose and outcome of time spent in the mundane events that make up the sum of an ordinary life. 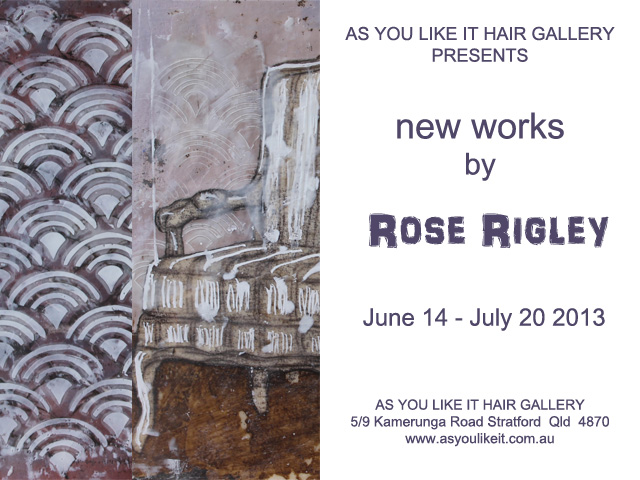 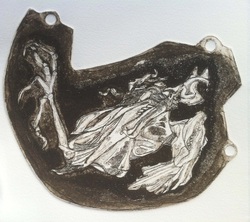 Better to enter the house of mourning takes the form of a man-made machine part, replicating a vital, life-sustaining internal organ, yet holding only the trapped and fossilised remains of a potential life.  The remnants of this life could be modern or prehistoric, giving a sense of timelessness, preserved in the final stages of struggle.  From the artist’s perspective, the divisions, struggles and machinations of our present circumstances appear irrelevant in light of the fact that all creatures are united in their final destiny - death.

When this project began, I spoke to my adopted indigenous sister to get her understanding of the colonial breast plate. She spoke of the plate negatively, as a ‘white man’s dog collar’. From this conversation, I also found that she was a descendant of the Yugara/Yugarapul people from south-east Queensland and a direct descendant of ‘King Sandy’ or Gairballie. This deserved further investigation.
There is not much information about ‘King Sandy’ but he was instrumental in the naming of one Brisbane landmark - Mt Coo-tha or as it was once called, One Tree Hill. When the Acting Clerk of Parliament came to Gairballie in the late 1800s for the indigenous name of the site, he was given a rude name ‘Coo-tha’ instead of the real name ‘Gootcha’ because Gairballie was angered by all the broken promises of the government. While the original men of struggle, like ‘King Sandy’, have passed from this earth, I find humour and poignancy in the fact that the city of Brisbane has grown around a landmark that is basically a lasting reminder of an indigenous ‘up-yours’.
(Rose Rigley 2013) 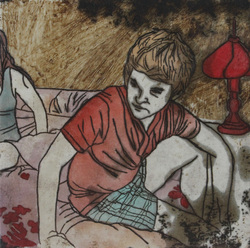 The Lethbridge Gallery has established a strong reputation for exhibiting works demonstrating exceptional detail and creativity. With the intention of fostering the next generation of artists, Lethbridge Gallery initiated the Lethbridge 10 000.
Now in its fourth year, this art competition is open to national and international artists for small-scale artworks. Entrants may submit paintings, drawings, photographs and all 2D artworks up to 60cm (24 inches) in any direction. The judging is based on three equally evaluated criteria of creativity, originality and skill with $10 000 awarded to the winner.

A full list of finalists can be found here. 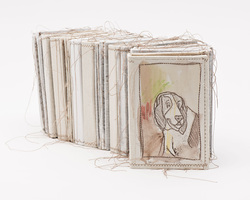 Selected as a finalist in the 2013 Libris Awards, Rose Rigley's work Memory book I-XVII was exhibited along with the other finalists at Artspace Mackay from May 10 through to June 30.

A full list of finalists can be found here.

Images of the exhibition can be found here. 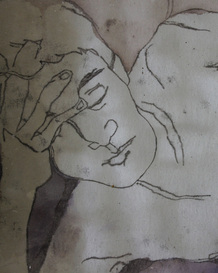 Memoirs of the third child (detail)
Knock Knock Contemporary Artists’ Initiative exhibition coincided with International Women’s Day on March 8th. With financial support from Arts Queensland and the Cairns Regional Council, the third annual Women in the Arts exhibition focused on bringing together works from regional Australian artists and fostering creative exchange with other ARIs. The exhibition ran from the 8th until the 23rd of March, 2013 at c1907 Contemporary Artspace and Canopy Artspace in Cairns, Queensland.

Women in the Arts - States of Play: Contemporary Australian Women in Regional Arts Practice featured artworks from 22 artists practicing across Australia and covering 10 different regions from Tasmania to Darwin. The exhibition aimed to capture a snapshot of the diversity of contemporary practice. Artists were invited to respond to ‘States of Play’ as a premise for the exhibition. This was related to the geographical location of artists, the playful association between artists and their artwork or challenges to the status quo.

A sense of place 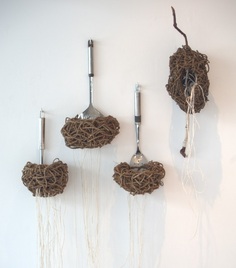 'A Sense of Place' explores what it means to put a modern twist on age old skills and to reflect a connection to the environment of Tropical Far North Queensland. The area allows artists the use of a plethora of natural fibers combined with unusual materials and techniques to create an array of contemporary artworks.

Rose Rigley’s works often focus on a personal symbolism. In this work, she takes a light-hearted look at the last 12 month period, specifically in relation to local Artist-run-initiative, Knock Knock Contemporary Artists’ Initiative, of whom she is a founding member. She works with natural and man-made materials, bending, twisting and combining to create new forms and identities.
The works speak metaphorically of the cycles and development of the human individuals involved as they have grown into or out of their ‘sense of place’. 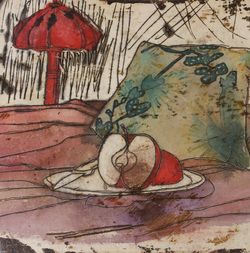 Breakfast in bed IV 2013
Rose Rigley continues to examine the elusive notion of memory. The enduring stains of resurfacing memories link inextricably to the present, and form the basis for Studies for the Mattress Account. Through the process, the artist questions whether it is possible to truly know the people we sleep beside.

Studies for the Mattress Account is an exploration of the memories we knowingly and unknowingly sleep with until, like the princess with the pea, they create a bruise large enough for us to pay attention. These memories often remain hidden and squirreled away, accumulating until it is time to flip the mattress and see what is stored underneath. Using an illustrative style to portray intimate moments and drawing on personal symbolism, the artist contemplates her own ‘Mattress Account’. 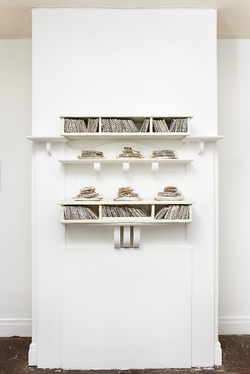 Simmer was a touring exhibition from artist-run-initiative, Knock Knock, based in Cairns, Queensland. The exhibition featured artists living and working in the Far North who explore creative territory ‘beyond the frame’. Sculpture and installation formed the basis for the exhibition, considering a range of individual themes including place, memory, the human condition and our relationship with the natural environment. Within their creative practices, Raewyn Biggs, Louisa Ennis-Thomas, Vide Freiberg and Rose Rigley share a common approach where both conceptual concerns and the exploration of a sense of materiality govern their creative process.

To listen to a 3CR Community Radio podcast by Elena McMaster about Simmer click here.